To be honest writing about myself does not come naturally to me, so I enlisted the help of my dear friend Joanna Kale. "Jennie" has a wonderful gift for writing and her extensive history with the Arabian horse (3rd generation breeder) made her the perfect author for my short biography. Thanks again Ms. Kale!

Catherine "Cat" McKenna is a graphic designer and long time horsewoman. She began her equestrian career as a child sharing rides on a friend's pony. Eventually, her friend's pony wasn't enough, and Cat convinced her parents to let her start taking lessons, which led to the lease of the half-Arabian mare Jasali (JAS Jameel Sakr (by El Hilal) x Twaz Asali (by a Ga'zi son). "Not long after I leased her, the people who owned her decided to sell her. For weeks, I would leave sticky notes all around the house for my parents that said "Please Buy Jasali." Her persistence paid off, and her parents finally relented and Cat official had her first horse."That poor mare went in every class at the horse shows and I had the time of my life while learning about sportsmanship and responsibility," remembers Cat. 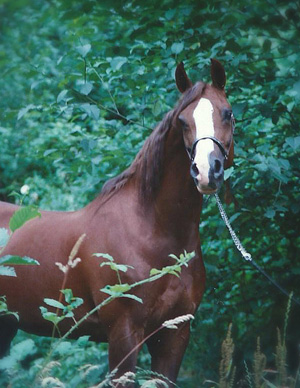 When she was fourteen, Cat got her second horse, NS Annies Song (Seffer (Pure English Breeding) x Bold Anne) upon whom she took home a Top Ten in Training Level Dressage at her first (and last) Youth Nationals. (The photo of Annie to the right, taken by Cat at 14, was also a 4-H photography blue ribbon earner.)

During college, Cat rode and trained with a small farm just minutes away from campus. She also bought two purebred mares as projects and became more and more interested in the Arabian horse world from a business perspective. After graduating from Oregon State University with a degree in Business Management and a minor in Equine Science, Cat lined up a job in Arizona as an assistant reining horse trainer, which subsequently fell through. "Here I had just made a huge move from Oregon to Arizona, was fresh out of college, and jobless," Cat recalls. "So I did what every other unemployed, fresh-out-of-college person does: I hit the pavement." She subsequently landed 3 part time jobs, two working with horses and one with another new couple to Arizona Scott Bailey and David Cains. "Scott and David were living and working out of a small appartment and had just moved Arabhorse.com from Michigan," says Cat. "They hired me on the spot to help with website updates, and I had a fantastic time working with them."

However, after six months of website updates Cat decided she wanted to experience a little of corporate America, so she applied for a position at Enterprise Rent-A-Car, which has a highly acclaimed Management Training program. She was quickly promoted to Assistant Branch Manager, and was overseeing one of the larger branches in the Phoenix area. In spite of her success, after a year and a half with Enterprise Cat would wake up in the morning dreading going to work. "I found myself driving to work contemplating swerving into oncoming traffic so that I could go to the hospital rather than the office," she says. "I needed a change and missed the horses terribly."

Cat struck up a conversation with Scott & David of Arabhorse.com again & found a need for her and the new skills that had been honed by her training & experience with ERAC. Cat once again went to work for Arabhorse.com as an Office Manager. "That is where I really began to understand the ins and outs of the Arabian horse business, as well as the amazing people that comprise it," explains Cat. "For the last seven years I have been traveling the world designing ads & websites, creating marketing plans and consulting with clients who have become more like family. During this time Cat has also been the event coordinator for the Arabhorse Farm Tour, which introduces approximately four thousand people to the Arabian horse every year. She also spearheaded the online Arabian horse magazine "Oasis" as its editor.

In March 2013, after seven years and the promotion to General Manager at Arabhorse, Cat decided it was time for another change and another adventure. She decided to strike out on her own and created Cat McKenna Design & Photography. "There is an incredible community of people surrounding the Arabian horse. I've been blessed by what this community has given me in experiences and friendship. It's time to showcase that, and give back. That is exactly what Cat McKenna Design and Photography is all about."